Holiday Food, a.k.a. When I Retire

Holiday food.  Ahhh, how I enjoy it.  What an important part of my holidays it is.
So, one of my souvenir gifts to myself is often a cookery book.  Another is the memories I take home with me of certain foods eaten during holidays that I really enjoyed.  Foods that are often very simple but so delicious.  I then take those ideas and sometimes a book and create dishes back home.
Sometimes I make the dishes p.d.q. after returning because I am so excited to try them.

Like an extremely simple snack I ate in beautiful New Zealand just before I returned home.

Let's call it New Zealand Toastie
A lightly toasted thickish slice of bread is covered with mayo, then shredded cooked chicken, chopped spring onions, a little cranberry sauce, then grated cheese which is then melted under the grill till soft, not browned crisp.  Sliced in half, then in thirds, making a delicious finger food snack.

How many times I've made that quick and tasty morsel in the 15 years since my visit there.

Sometimes I forget to make those dishes post-holiday, dishes that I was so inspired by at the time that I bought the cookbook. 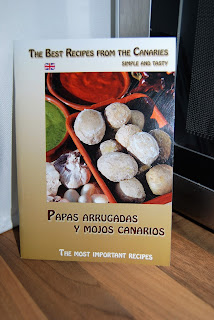 And then the oh so entertaining Anna from Anna of The Mutton Years tweaks a memory button and I remember that I bought this cook book in Lanzarote 4-5 years ago and yet I still haven't tried out the deliciously salty and simple Canarian Potatoes that I enjoyed most days of my holiday there.

In fairness to myself, I have been rather focussed on 1930s British cookery books these past few years and have enjoyed cooking from those (more on that another time), so the more exotic stuff has been rather shelved of late.
And when I'm not achieving things I have stored in my mental wish list, culinary or otherwise, rather than beating myself up for being an under-achiever, I comfort myself that I will do these things "when I retire".  You might find this little self-help technique useful.

I've always envisaged retirement as being endless days, weeks and months where I wake up and wonder what the heck I'm going to do today, what I'm going to fill my day with.  And as since giving up work I wake up each day and wonder how the heck I'm going to fit in all of the many things I just have to do today, I tell myself that I can't have reached "retired" yet.  I figure that when I find myself with an endless stream of 24 hour voids, then, and only then, will I be retired.  And at that point in life, I will find myself cooking Canarian Potatoes.

But until then, provided the food memories are simple, I am more likely to recreate them sooner than later (or never).  So let's look at my recent holiday haul. 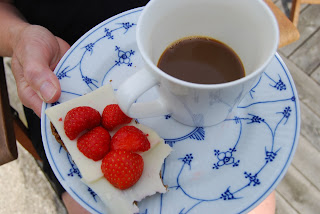 My culinary wish list can include something as simple as this little plate above.  Something I've never thought to put together before.  Like black bread, a slice of Havarti cheese and some freshly picked strawberries.  This cheese and fruit sarnie may sound a little strange, it did to me, but trust me, this cheese and strawberry combo so works.
(Whilst writing this, I'm giggling alone in my turret 'cos it's putting me in mind of a Bob Newhart sketch - you have to be really old like me to remember him and his hilariously clever sketches! So for those who are not familiar with his brilliance I give you his Sir Walter Raleigh sketch.
https://www.youtube.com/watch?v=_XDxAzVEbN4)

Right, recovered from your roll-about-laughing fit?  Then, let's return to the task in hand. 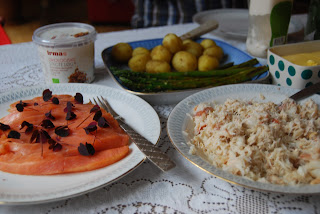 It can be simply slabs of smoked salmon sprinkled with lemon-tasting woodland leaves, served with new potatoes and chargrilled asparagus.  Yumsville! 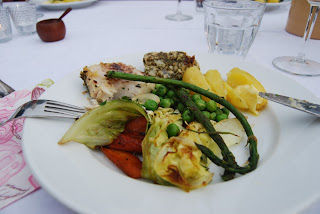 It can be a summer's serving of fish and vegetables eaten on a deck in a woodland setting.

Simple food usually belies the fact that much thought, planning and preparation has been put into the meal.  In the same way that dressing elegantly but simply, involves the same behind-the-scenes approach to give it the outward appearance of effortlessness, I guess.

Taking the above plate as an example, good, fresh ingredients were sourced locally.  Thought went into how these ingredients could be prepared to maximise on taste.  Planning allowed the hosts to give the illusion that little work was put into "throwing" the ingredients together.  Planning that made the process seem so casual that small tasks could be delegated to involve the guests.
That's all pretty clever stuff! 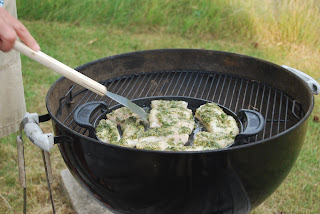 Here, the locally-sourced hake was marinated for a while in a mix of fresh finely-chopped herbs then cooked in a cast-iron grill pan over a BBQ.  The kettle BBQ, possibly Weber, was first fired up using a chimney starter.  The hot coals then cooked the fish in lightening speed, allowing the fresh flakiness and moisture to remain in the cooked fish.
﻿

I'm not sure whether The Photographer was receiving valuable grilling training at the BBQ from our host, or if felt that he was supervising the process!

Whilst the fish was cooking outside, the accompanying vegetables were cooking inside.  The new potatoes were boiled for 10 minutes, then drained and left to steam in the covered pan for 5 minutes.  I usually cook mine longer so I am looking forward to trying out this timing soon.  Before I retire.
The remaining vegetables were cooked slowly in frying pans. 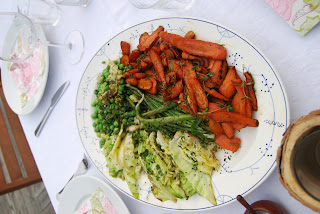 On reflection and from memory, it seemed that the task that took the longest was all that herb chopping.  And that's the illusion that elegant cooking creates. 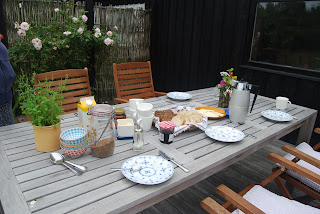 And the simplicity continues.  Here, a traditional breakfast of ymer which is a delicious thick unsweetened sour milk product; topped with Ymer drys, which looks and tastes like finely whizzed dark rye breadcrumbs mixed with brown sugar.  So I think that is what it is.
A selection of breads eaten with Havarti cheese or jam.  Juice, coffee.
A table decorated with flowers from the garden cut just before we sat down to breakfast.

But enough of this procrastinating wondering stuff.  For right now, peeps, inspired by my own blog I'm about to recreate some holiday memory magic.  I'm off to pick some garden flowers for the table.  Start with the simple stuff right now, eh peeps.  On hold is the more complicated stuff in my cook books from Switzerland, Malta, the Canaries ... (both list and shelf seem endless).  I'll get cracking on those recipes when I retire.

I dunno ... recipes, comedy sketches, self-help lessons ... all in the one post -
I'm just too giving some days!

Posted by thepoutingpensioner at 17:38:00