An Ab Fab Sort of Day 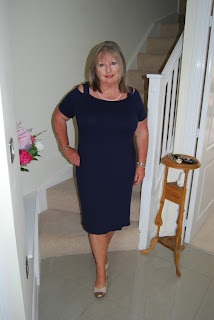 Jane at mymidlifefashion is making life far too easy. 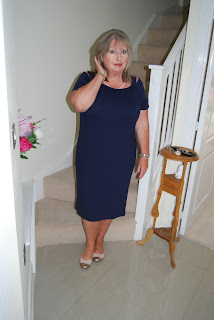 The OOTD is a doddle.  No stressing about separates, colours, patterns.
As it was a dull day I just grabbed this navy Bardot again.  No stress about wearing the same dress twice in one week.  I'm on "holiday".  Living out of an imaginary dresses-only suitcase. 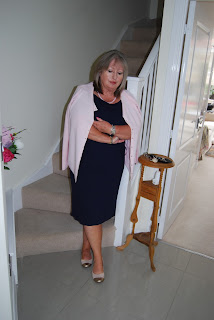 Maybe just take a nanosecond to chose a necklace, like this pink pseudo-Swarovski here. 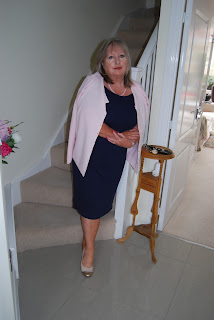 Then throw over a pink cardi. 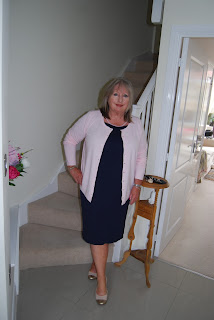 And taa-daah, but a moments work to get ready for daughter in law who's coming down from London later today for the weekend.

So, what do I with all this extra stress-free time?
How do I fill my day with fabulousness?
Well, I need to cook for DIL so let's put together a recipe ...

I browned some chicken breasts in olive oil and butter, then simmered them in chicken stock with some tarragon and garlic granules.
I then placed the breasts in a baking dish to sit with some freshly chopped coriander over, whilst I cooked up some chopped walnuts in the stock in the pan, adding some white wine and a splash of brandy and some dried tarragon.
When that mix was nicely cooked down I added S&P and a pot of double cream (285ml), sploshed it over the chicken and placed it in the oven at about 190c for 25 mins.

But I needed a vegetable and there's not much in the house.
Hmmnn.  So, I also made a vegetable roast using what I had available (quarters of 2 onions, 2 long red peppers and 1 green bell pepper, mixed with olive oil, S&P and chopped coriander).  That's cooking in the oven for the same time.

And if that's not enough calories and cholesterol, then I will offer DIL an apple pie and cream.  M&S, of course, there's a limit to my fabulousness!

It's in the oven now as I'm typing.  I hope it comes out OK, as I've been making it up as I went along.  If it's OK, I'll post a photo at the bottom.  If it's not, you will know nothing about this as I will have deleted this recipe section :-). 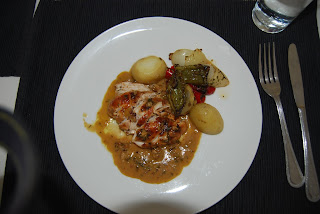 Some time later.  Phew!  The recipe survived. And you get photos.  For it turned out OK.  Fabulous, even! 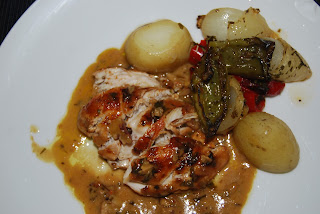 Now, what can I call it ...?  Any ideas? Absolutely Fabulous Chicken?

And just a footnote, I'm trying to clear out the chocka freezer,
and also be aware of what I'm eating, post-holiday-indulgences. 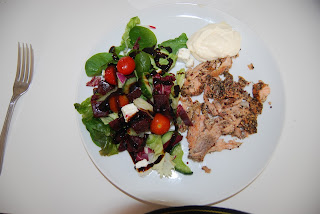 So lunch was flaked peppered salmon salad.
Apart from the coriander, salad stuff and the spuds, everything else today was from the freezer or store cupboard.

So, a pretty fabulous day, all round!

Posted by thepoutingpensioner at 15:26:00