Shortly after I wrote the post about the belted-cardi, I chanced upon a post on the lovely Andrea's livingoncloudandreanine which dealt with the belted cardi and another fave, the faux neck whatsit.  Then I dippped into whenthegirlsrule and this lovely lady was dealing with the belted look on my type of body.  How spooky is that?  These posts were like buses! Though mine didn't turn up on Friday night (note to self, write letter of complaint to bus company).
But I've hopped on the Public Transport of Digression, back to the plot.  With all that coincidental stuff, I felt that the universe was telling me to give the belted look another go.  But this time, with trickery!  The second lady blogger cleverly suggests belting up then adding a Third Piece to the outfit, e.g. a jacket or a cardi.

Her idea is that the third piece drapes around the body, allowing just a bit of the belted waist to show.  You create an illusion that the partially hidden waist is actually a pretty good waist if
you could but see it all, and it definitely is an asset you wanted to enhance because, hey,
you put a belt around it!  After all, would anybody in their right mind want to bring attention to a less-than-perfect waistline?  Clever, huh!


Well I just had to give this belt trickery a go!  (Yes, Christy, belts again!!)
So let's start with the basics ... 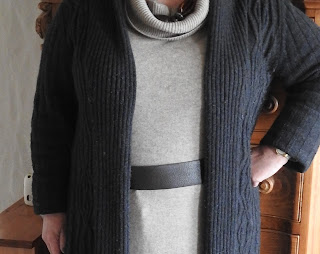 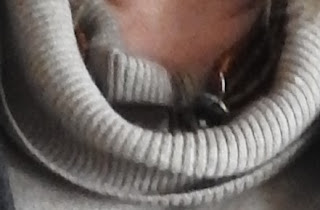 I added amber beads to flow with boots and belt.

I donned jeans and a long line East cardi (grey, but different!).  I added the belt shown previously but this time added my Third Piece over the belt.  I first tried it with a furry neck whatsit.

Then feeling less than brave, I gave myself a safety net.   Hey Pout, if you wear a long scarf, you can always let it hang down low to camo the belt if you start to feel a little less than happy showcasing your belted waist!  Which is what I did when I went to the osteopath after this "photo shoot".
I am such a wimp!

Does it work? I won't ask The Photographer's opinion, duh, he would see just string and sack.
So it's down to you to let me know if this trickery works for me.  It did for the lovely lady blogger.
Why don't you give it a go if you are in the less than perfect waist gang and perhaps you could pop back to let me know how it works for you?  Let me know if you get lots of waist-related compliments.  I'd be insanely jealous interested to hear.

Posted by thepoutingpensioner at 17:30:00