Do you know what's good about your body?  And what's not quite so good?

I am certainly pretty clued up on the latter.  And "not quite so good" is being most generous!
Thick waist, short dumpy legs, thick calves, top heavy ... oh the list goes on.
I struggle to find any areas to note for the good bits
apart from the big plus point, that it's in working order (and I am really glad for that) so I clearly need to focus on ameliorating the less than perfect areas.

On to today's outfit in this so-called Masterclass.  The belted cardi.
Hold on.  Did I just completely ignore my sagacious words in the above paragraph?!!
A belted cardi is going to surely bring unwanted attention to my thick waist -  but hey ho, I've fancied trying this for a couple of years and kept getting deterred banned from wearing this combo for (and brace yourselves) ...
I am told doing so makes me look like "a sack tied up in the middle".

However, on this day I was feeling a little braver than usual and I demanded insisted  kindly asked that The Photographer take photos (he usually refuses point blank to take photos of looks he is less than happy with).

.
This is a belt of two halves, thin and wide.  Using the thinner side showing at the front, it really did look like "a sack tied in the middle" which BTW is the gravest insult criticism that The Photographer
has of womens' dress.  I agreed with him in this instance.
It does give the appearance of a piece of string tying the thing together and brings attention to a thick waist.

I then swished it round.  I think this works (he didn't, of course).  I think the extra width creates better balance and doesn't look like a piece of thin string tying up a large sack. Proportion is key.  Agreed?

I then put on my furry neck whatsit, adding balance and cohesion by following the brown through the body (boots, belt, neckage), linking all three and creating a reason for the belt being there.  Agreed?

Now, having The Photographer in the house is such an asset for photo-taking.  Having A Photographer With Fashion Views is not.  For although I managed to cajole him into taking photos, he insisted that he wouldn't leave the house with "a sack tied up in the middle".
So the belt stayed at home :-(.  It didn't get to go to the ball, or in this instance ... 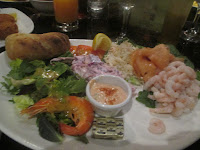 ,,, it didn't get to go the The Deerhound Inn and watch its owner behave abstemiously by eating a healthy prawn and crab salad.  And a few of TP's chips.  And a spoonful of Sis's ice cream.

Yes, this post does have a sad ending.  The belt stayed at home. Sorry, I should have warned you.

So that was my masterclass,  my top tip being to use a wide belt to pull off the belted cardi look on a thick waist.
The Belted Cardi look.  I think I pulled it off.  Agreed?

﻿NB: For those of you who don't truly know me, I use the term "Master Class" here
in a loose, ironic, tongue in cheek way.
Posted by thepoutingpensioner at 17:09:00

It’s been the sort of week I hope doesn’t get repeated for a while.    Brakes fixed on the car.  A tooth crowned.  An aging cat in the ... 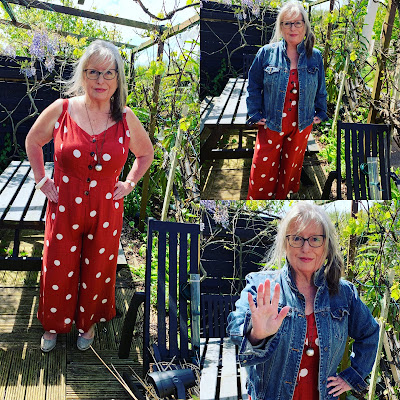