Here's a sunny summer breakfast for you,
Just Like Gran Used To Make.
This recipe is so simple it doesn't even require your usual recipe format.
Take tomatoes, all the same, a mix, doesn't matter.  What does matter is that they taste like tomatoes. 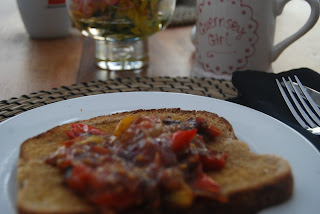 Wash and chop the tomatoes.
Fry in a mix of butter and a little oil, to prevent the butter burning.
I had a little onion left over from last night's tea, so I added that too. 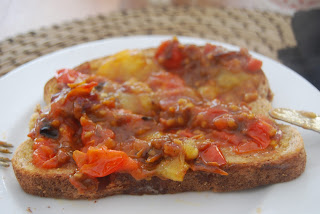 Fry slowly, so as not to burn the tomatoes - they must be slushily cooked.
When cooked down, add the merest sprinkle of sugar, salt and pepper. 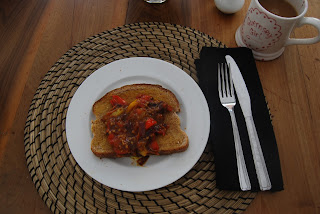 Place on a slice of toast and serve up your sunny summer breakfast. 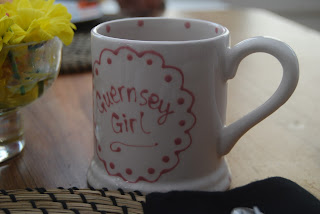 Wash it down with a mug of coffee (or tea, if you like that stuff).

Now, why Just Like Gran Used To Make?
Well, here's a little story, if you have the time ...

When I was growing up, the island was a big tomato exporter to the UK.  Tomatoes were grown by the heat of the sun.  Tomatoes used to taste like tomatoes.
The UK joined the Common Market.  Our tomato industry died.

Its a common view that the mass production of tomatoes force-grown in heated greenhouses has affected the taste of tomatoes.  'Aver, back in the day tomatoes were abundant and most meals here seemed to be based around the  tomato.  The tasty kind.

And during the summer months back then, if I wasn't at school I was out on the beach living out my  Enid Blyton or Bobbsey Twin adventures. 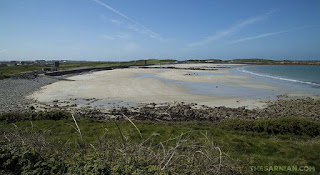 Mum would pack me off to the beach with a tomato sandwich in a paper bag, a bottle of cordial, a wrap (tubular towel for drying/changing in) and a pair of bathers.  All squashed into a duffel bag.
Sometimes I'd take my younger sister (not squashed into that duffel bag!).  And I'd always pick up a cousin and maybe a friend on the way.

So my first stop was a walk down the road to my Gran's where the cousin lived.
I remember fondly my Gran making me breakfast before I headed down to the beach.
Breakfast of fried tomatoes on a thick slice of bread.

Luckily this summer I have an abundance of home-grown tomatoes here and I discovered that, Eureka!, they  actually taste like tomatoes did back in the day because they are grown by nature's sunlight.
So I was inspired today to cook up a good old Guernsey breakfast.
Just Like Gran Used To Make.
The only difference being the bread element - for that she would hook a loaf under her arm, slap a load of Guernsey butter on the end of the loaf with a knife in her free hand, then cut off a slice (of bread, not her hand!) with the same knife.
Today, I opened a packet and took out a slice - but I still slapped on the Guernsey butter!

Up to my Mum's generation, the island people spoke Guernsey French, a patois.
So, I say to you as Gran would have said to me as she saw me off on my way to the beach ...