And so the bad selfies keep coming ... 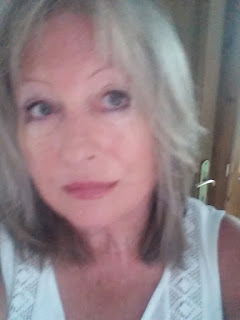 Actually, I think I prefer me in soft focus. 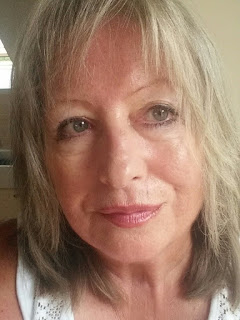 So again today I give you another OOTD in two halves.  Head. 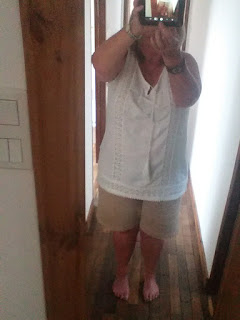 I took this Next top and shorts, shown more  clearly here and here, to

Now, I need to be totally up front with you, dear reader.  Only visit this place of rest if Merlin is truly big in your life.
Because the visit involves tracking down an un-signposted car park, then a 2 km walk from there through a poorly signed forest.  We found two arrows in 2km of meandering pathway; each sign was about 2cm square and painted discretely on stone.  In a dark forest.  The more critical of the two painted on the side of the stone NOT facing the oncoming Merlin-seeker.

We met lost French Merlin-seekers.  We talked, the way strangers of mixed tongues communicate and instantly befriend each other in times of crisis.  We formed a gang, safety in numbers.  Together, by instinct rather than signage, we found our way out of the forest and to another car park.  At the side of a road.  Just 100 metres for Merlin's Tomb.  We crossed the road and made our our way to 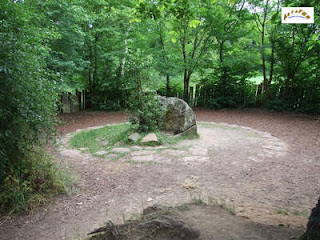 Merlin's tomb.  Where he is buried.  Allegedly.

And then 400 metres further down a track

to the fountain of Bereton, where Merlin met Viviane.  Allegedly.

Merlin is also buried in several places in England.  Allegedly.
He really should have documented his whereabouts in a diary.
Or kept a blog.

We had planned to go on to The Church of the Holy Grail after the tomb.
It started to rain.  As we walked the two kilometres through forest showers back to our car park, we met more lost French Merlin seekers.  They asked anxiously if we had found the tomb.  We gave them directions and helpfully informed them of our findings.

During that wet walk back and after due reflection of what we had just experienced, we decided to give the church a miss.

As I say, you really do have to be a big Merlin fan to want to hunt down the spot where he was buried.  Allegedly.
Alternatively, just use the closer car park!

Wishing you a wonderful weekend.

Posted by thepoutingpensioner at 08:29:00