Hi peeps, thanks for popping in.  Hope it's nice and sunny where you are.  It is here.
The bees are buzzin' and the garden's growin'.

Now I guess I've always felt that there really was no need to go through the palaver of growing fruit and vegetables when there is so much available on our hedge veg stalls throughout the island,  Picked daily.  Some of the stalls are so close to my home that I could do my shopping in my PJs!

But I now know what all the fuss is about. 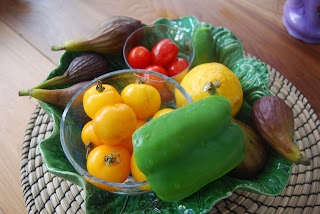 This is a bowl of my latest pickings from the garden.  Everything tastes so different.  Because it's organic, yes, but more importantly, it's eaten within an hour or two of picking.  And that makes a huge difference to freshness, texture and flavour.
For example, I'd already eaten the other half of that green pepper when I took the shot above - I tell you, peeps, it was so firm and crunchy and so flavoursome.  I'm now a convert! 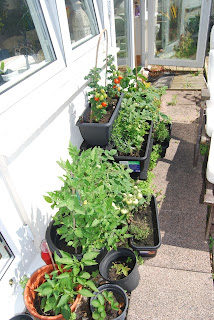 This is the Grandkiddies little veg patch we put together, for them to enjoy in the school holidays. 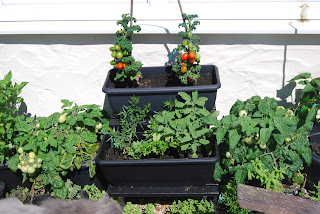 It's produced an abundance of baby plum tomatoes and regular yellow and red tomatoes too.  Peppers and chilli peppers.  A variety of herbs.
GS doesn't usually eat tomatoes.  He does now!
And GS is now growing cucumbers, which he does already love.  Totally the wrong time of year to be planting seeds, according to the packet, but the seedlings are shooting up like billy-o. 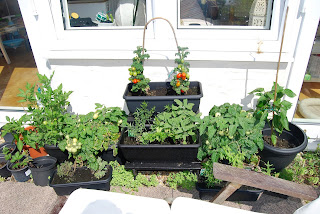 The "patch" is just outside the patio doors.  So, forget food miles.
We're talking about 3 yards from patch to kitchen.  "Food Yards"!
And, as you can see from the photo, I can lounge on a steamer chair and watch the veg grow.
G&T in hand, of course!

What else has done well?

Elsewhere in the garden, the raspberry bushes have been so giving this summer, and the redcurrants have done fairly well too.  The birds ate all the blueberries early on, so I've not been able to enjoy even one little blue berry.  But I'm sure there have been some happy birds flying around the garden with filled little berry-bellies.
I've been cutting down a lot of chives and I've had a bumper crop of figs and rhubarb.
Hopefully, the pear tree will be yielding another good crop this year.
I haven't seen any white peaches yet on the tree we thought was an ornamental cherry tree for ten years, until last year when GS spotted peaches!  I am not a gardener, as you can tell!
Those are the things that have done well and which I will definitely plant out again next spring.

What hasn't so done well?

Just one strawberry this summer!
No sign of olives on the olive tree and bushes.
No sign of grape bunches on the grape vines.  2006 was my last bumper harvest.  From a white grape vine that had been established there long before I moved in. 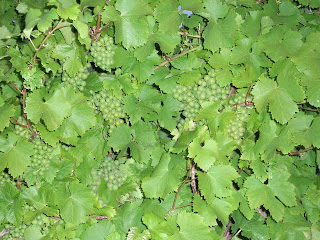 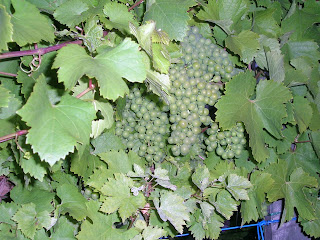 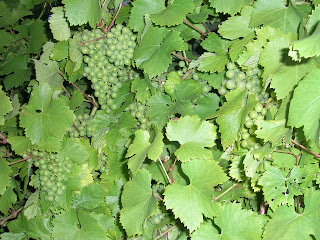 Maybe thinking that I was about to produce my own Chateau du Pout, I planted a red grape vine shortly after.  That died this year. 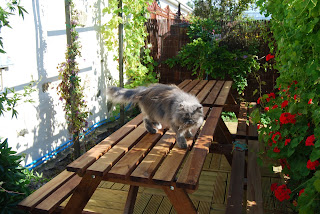 You can just see the red grape vine (RIP) starting to grow at the end of the run of white wall.

So I will not be making my fortune from wine or olive oil.
But that's OK because I really want the grape vine to provide a covered eating area where we, guests (and cat) can keep cool. 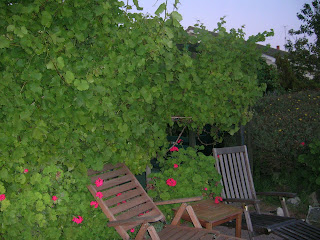 So why all the plant talk and analysis?  Because the so lovely Janet of thegardenerscottage asked about our planting plans for autumn.  Janet got me thinking.  Do I have plans?  Well, yes I do.  I will hopefully be planting new sheds in the autumn!  But next spring I will definitely be planting more fruit and veg, now that I've been converted to crunch, taste and "food yards".

And finally.
I was so relieved to finish the recent series of posts on my French holiday.  Relieved because due to techy constraints I had to post "head" and "the rest" shots.  It took a few days for me to twig that in the popular posts section to the right of my blog I was starting to see a tower of "head" shots building up.  And so it has continued.  I've had to endure seeing five mug shots glaring at me for days now.  And maybe you've noticed that too. Then quickly looked away!
So I won't be doing that again.  I've learned my lesson.  Vary the first photo of a post, Pout!

That's why I've posted a nice healthy bowl of fresh fruit and veg for my first shot.  And why I've saved this shot for last.  So that I don't have to see it pop up on my screen.  Maybe for days! 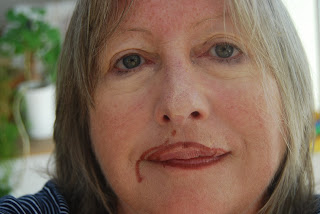 Would you want this shot appearing daily in the r/h column?!!
Me.  With no make up apart from Clown Lips?!!
I was about to put a bit of makeup on before taking the GKs to the North Show (one of three agricultural shows we have on the island during August).  My GD offered to put on my lip liner for me.  I know she loves me but ... !!!

Moving swiftly back to gardening ...
Do you have plans for planting?  For autumn? For next year?
What's done well in your garden and what's done not quite so well?
Floral or edible?  What's your bag?
Maybe you're just not into edible gardening?  Like I used to be before my Conversion.
Or maybe just not into gardening at all.
I'd love to hear from you.  Go on, make my day and tell me you've had bumper crops!

Posted by thepoutingpensioner at 15:52:00