It's a while since I posted a piece for those of you who like a bit of history, so I give you, tadaah - Victor Hugo.

He wrote that he fell in love with the island from the moment he set eyes on it as he sailed into the harbour to live his years here in self-imposed political exile.  He returned to France when Napoleon III was toppled from power.

He bought Hauteville House in Guernsey, which guaranteed him permanent residence.   He liked that he was able to speak French and French patois with the locals.

Because he was in exile and could not freely commicate with those in France and news would have been slow to reach the island, he channelled his concerns for his beloved France into his writing.  The island provided the inspiration for some of his greatest works, like Les Miserables.   His strolls through to St Peter Port's harbour and the fisherfolk there would have no doubt inspired him to write Toilers of the Sea, another great work.


He enjoyed striding along the cliff walk to Fermain Bay and climbing Victoria Tower, where he allegedly used to meet his mistress.  In fact, because of complications in his marriage and how things were handled back then, his mistress was his great love of over 50 years but it would seem they lived apart.  And, probably appropriate for the time too for those who could afford it, he bought her a house just down the road.

His house is open to the public for guided tours, by appointment as numbers need to be controlled.
I have been coming to this house since my school days and it is still one of my all-time favourite places to visit.  It always amazes me.  If you visit Guernsey, please find time to arrange a visit.

Now, fancy a look inside? 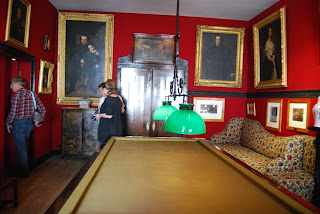 A man in exile needs a room for his pool table. 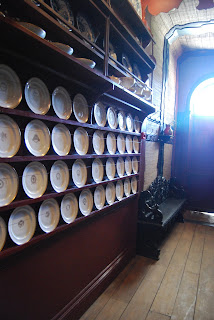 An annex to the dining room has a fine display of plates on the wall ... 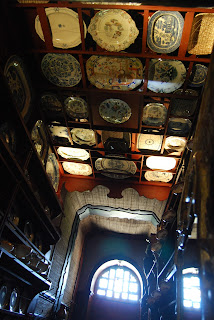 ... and on the ceiling.  Was Hugo running out of space for his collection? 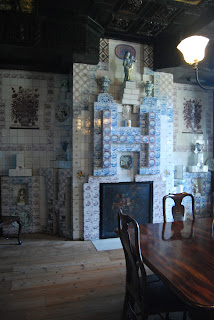 The dining room has a beautifully tiled fireplace and walls. 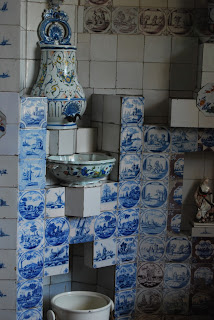 It includes a little crevice for washing hands between courses.  How clever. 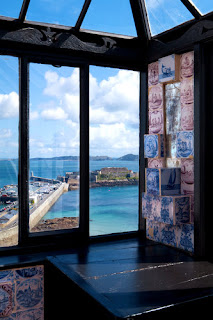 As well as being a renowned writer, Hugo was also a dab hand at the old DIY.
Not a lot of people know that either.
He took great pride in his house.  He scoured second hand shops and made new pieces of furniture from various pieces and recycled and upcycled like nobody's business. 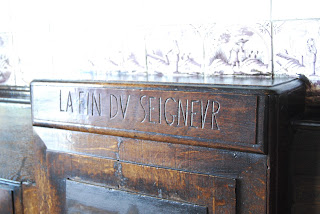 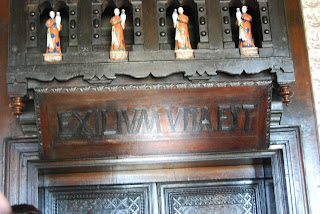 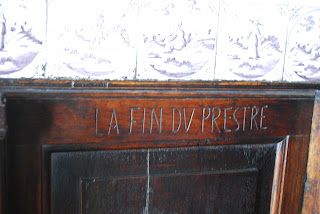 He clearly enjoyed a bit of whittling.  Numerous carved writings are dotted around the house, some humorous, some rather morbid, some with a hidden message. 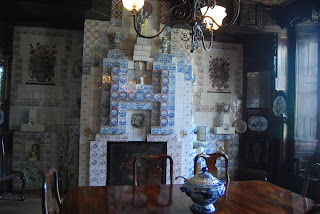 He enjoyed leaving his mark in the house.  Literally (pun intended).  His initials are laid out in various forms and materials.  Here an 'H' in tiles in the dining room.  No mistaking whose house it was eh? 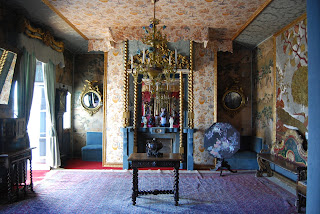 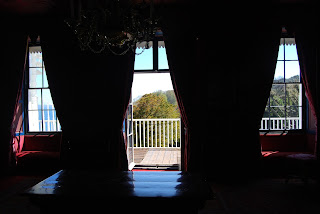 Hugo used doors and windows to maximise on the stunning views out on to the bay, harbour and castle. 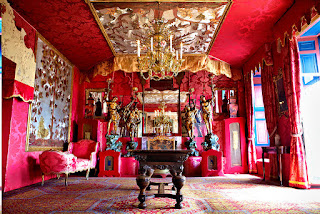 He decorated with rich fabrics and tapestries and strong colours. 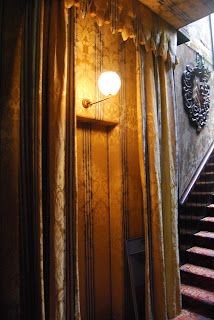 He created subtly hidden doors and cupboards by covering with padded damasks. 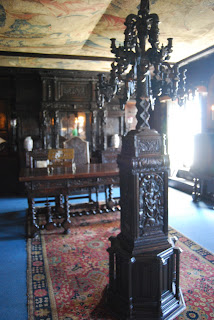 On the next floor, his massive bedroom includes a writing desk, maybe for scribbling down night time ideas for his next novel. 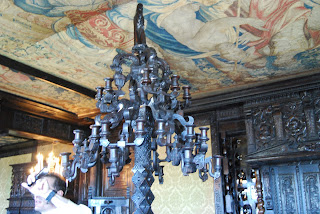 He used old cotton reels to create this bedroom chandelier. 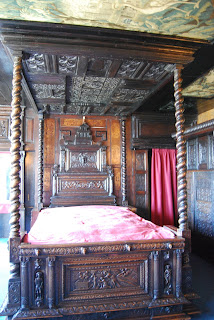 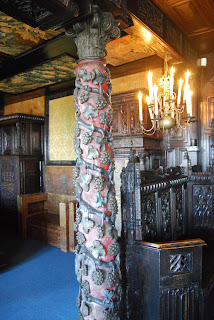 One of two intricately carved pillars which hold an archway between bed and desk areas. 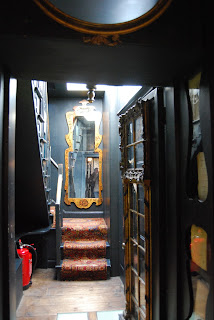 And up some sneaky stairs to my fave bit in the whole house. 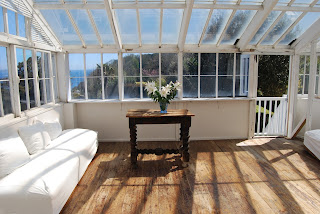 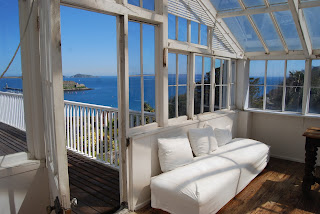 Providing beautiful views out to Castle Cornet, Havelet Bay and over to the neighbouring islands of Herm, Jethou and further away, Sark and Brecqou. 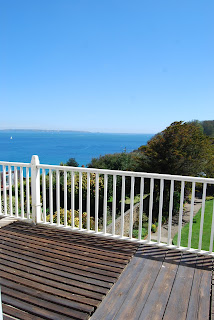 And on an extremely fine day, he would have seen beyond the islands to France. 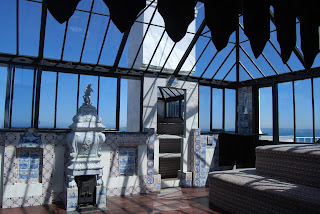 Creativity and artistry continue to abound in Hugo's conservatory.  And how very modern, a multi-fuel stove set into the glass framework! 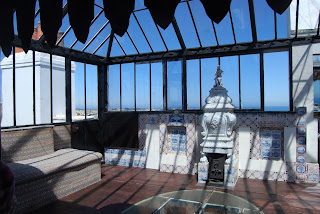 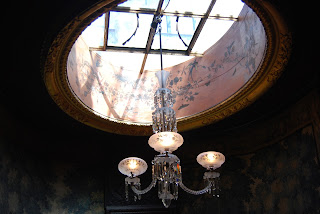 providing light and a sky view to the stairwell below. 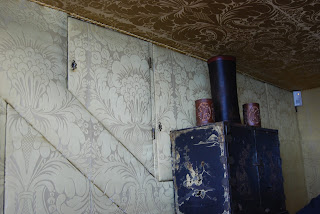 Alongside the conservatory area is a suite of rooms, again
the walls padded. 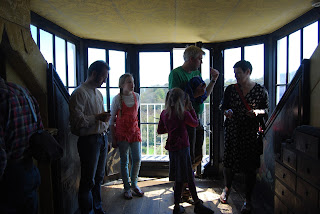 A fine captains lookout through to the area of La Vallette, the Victorian bathing pools and the cliff path to Fermain Bay. 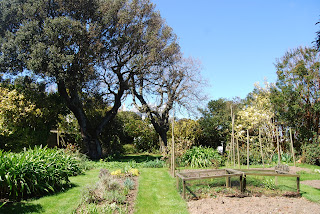 The gardens are rambling and beautifully maintained. 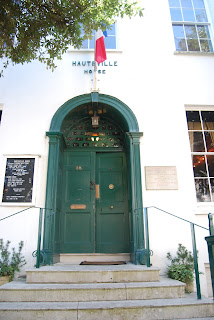 Thank you, Victor, for coming to our island, for writing such great works, for decorating your home so creatively.  And thank you to all involved in maintaining the house with empathy and  authenticity.

I hope you enjoyed the visit.  You can find some better pics and accompanying music here.