Join Me On Safari!


We've just returned from a wonderful holiday at Center Parcs in Longleat Forest.


During our trip there we visited Longleat House and Safari Park, which is a stone's throw from Center Parcs.  Ideal!

It was the first UK stately home to be opened to the public, in 1949.

The house was completed by 1580 and is now home to the 7th Marquess of Bath.

The house is set in 900 acres of ‘Capability’ Brown designed landscape.


﻿﻿The interior of the house is just as fabulous as the exterior! 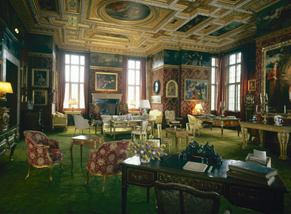 Each room has a different but equally magnificent ceiling.

The dining rooms are laid ready for dinner.

The house has amazing bedrooms.  And a maze.  (see what I did there?!).

Various family groups live in upstairs apartments.  The house caters for weddings and events and property can be rented - what an experience that must be!


But Longleat is probably best known for its Safari Park, which opened 50 years ago this year, with the park's biggest pull being The Lions of Longleat.
Now, I do not like to see caged animals.  It makes me very sad.   But here the animals roam free and endangered species have the opportunity to breed.

Naturally, there's security around the areas where these Big Boys run around!
Some looked like they longed to eat me (see what I did there too?!!)

I think my faves were the giraffes, so beautiful, so elegant, like cat-walk models of yore.
And being Spring (in the animal kingdom, not ours - brrr!) there were lots of newly-borns to drool over, like baby camels and giraffes.

The cheeky monkies roam freely on to the visitor's cars and can sometimes cause damage, running off with their spoils - windscreen wipers and hubcaps!

Posted by thepoutingpensioner at 08:38:00