What Would Gracie Wear - Jumper and Shirt

Hello my lovelies.
I thought I’d play around with formats a little.
I’m going to attempt a series made up of short snappy daily posts, interspersed with some posts about home, cooking and Guernsey which several have you have asked for.
Please let me know how this approach works for you.
So on to my mini series.
Do you sometimes hit on someone whose style you like?
Whose style fits in with your way of life?
I found the series Gracie and Franki soon after we got Netflix and immediately there was a buzz in my world as each day I found myself wondering what Gracie would be wearing in the next episode.
I felt an instant affinity with her style.
So I copied one and walked away from that phase.
But I’ve recently realized that of the trillion pics I saved of her, some quite literally screenshots, most of them matched outfits I wear time and time again, without giving Gracie a second thought.
Because I’ve found my style double!
So I thought I’d match some hers n mine pics and hopefully provide some outfit inspo for you 55+ ladies who may be needing ideas for at home/lockdown ideas right now.
That’s the intro over.  From now on the posts will get straight to the point, straight to the outfit.
Phew! I hear you utter in unison!
So I kick off today with the outfit I actually stole off the delightful Gracie/Jane; I suspect that Jane Fonda chose or heavily influenced her character’s wardrobe selection. 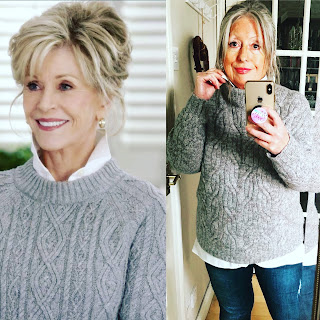 This outfit is a typical winter/spring outfit for those at home, either working from home during lockdown or fully retired like moi. 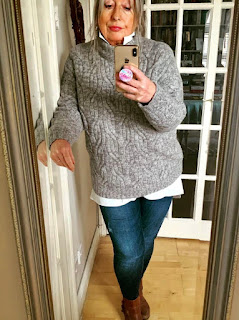 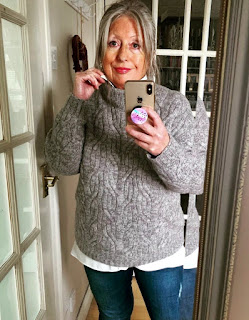 Gracie adds a white shirt, which peeps out over collar and from under hemline of a grey chunky knit.
Grey and white, what’s not to love about that crisp duo.
I’m not too sure about the hemline bit but I like the crisp white next to the face at collar height.  This allows the wearer to benefit from a white reflection on the face, very flattering, without having a huge expanse of white bringing attention to the torso which isn’t always an area you (ME!!) would necessarily want to draw the eye to.
So today’s look is one that flatters the face and elevates the casual jumper and jeans look, but just a notch so that it is still a wearable casual outfit to fit 55+ lifestyles.
Have YOU watched the Gracie and Franki series?
Hugs, Mary x.

Posted by thepoutingpensioner at 13:55:00