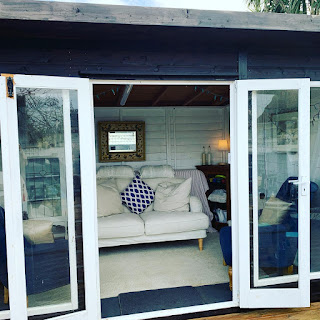 Just before Christmas the summerhouse became a dumping ground for stuff destined for charity and recycling ... I’ll get rid of it all after Christmas I told myself.  Out of sight, out of mind until then.

The summerhouse detritus included a pair of armchairs bought at the beginning of last year that quite simply were a mistake online purchase.  They looked just perfect in the pictures but the reality was that the backs were too high for the intended room and the result was an over cluttered space and a jarring eyeline.

So they had to go. 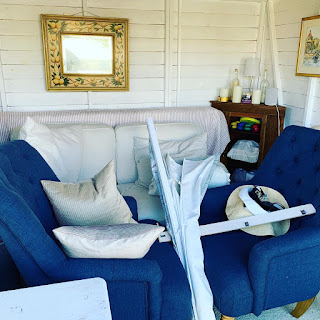 A piled up hot mess of arm chairs, Roman and Venetian blinds ... You get the picture eh.

Anyway, I quickly turned a blind eye to the mess at the end of the garden and moved on.  Then the lethargy that is winter ailments took centre stage in “after Christmas“ and we missed our charity/recycling window when we went into lockdown 2.0. late January. 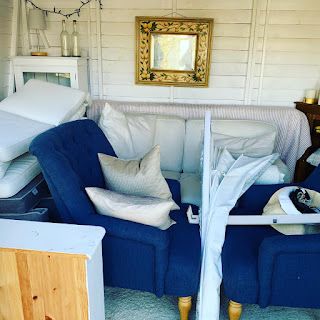 (More on that dated CD rack, bottom left, in another post)

And now in late February, with the opening of charity shops still a distant dream, I was facing the spring birdsong evenings without the cosy comfort of the summerhouse because of the charity donations sitting in the summerhouse where I should be sitting!

But fear ye not.  A few days ago I awoke to the thrill of a spine-tingling eureka moment!  I “repurposed” the unwanted armchair squatters and repositioned the bits and bobs, and after a whirlwind clear out and spring clean the summerhouse is now back in business. 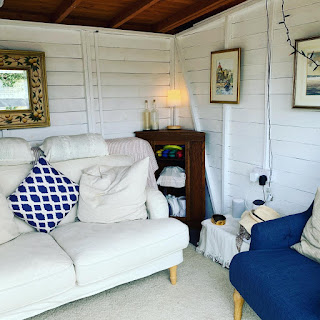 My repurpose idea  brainwave was to actually USE most of the bits and bobs in situ, like the armchairs.
A plan so simple you could pin a tail on it and calm it a weasel!
Totally useless stuff (blinds, a dated CD player etc etc) were placed in the car boot ready for when the recycling dump starts up again. 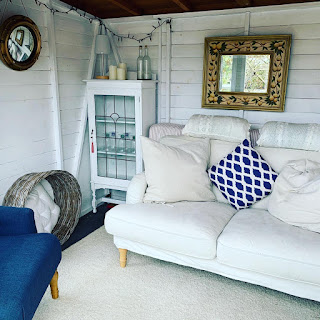 Think I deserve a spring evening G&T in here, don’t you? 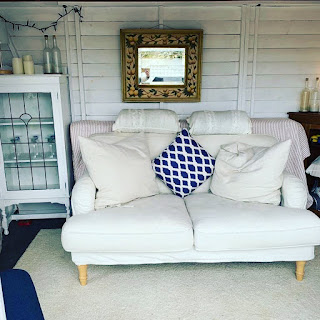 Have you had any eureka moments lately?

Posted by thepoutingpensioner at 10:35:00