Hi my dahlinks, I'm so pleased you stopped by, so pleased you've spared me some of your precious time to pop in and see what I've been up to, for we're all busy, even in retirement.
What have I been busying myself with? I hear you ask.

Well, I've been crying.  When the GB netball team won gold in the Commonwealth Games last weekend.  I'm an ex netball player, so it was great to  see them win their tight game by one goal in the last few seconds.  Squish squish, the tears rolled down my cheek.  It's OK, I wasn't wearing mascara, 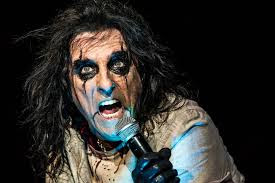 so no Alice Cooper eyes on me, no panda eyes.  On that occasion at least.  Read on.
What else have I been doing?  I've been looking after my convalescing patient, who's doing really well.  I've been cooking him lots of tasty and nourishing little meals and picking up his normal quota of the household tasks.

During the time he was in hospital I was with him all day, every day and housework was reduced to the bare minimum.  So I've been playing catch-up in the last couple of weeks.  Not one to do things by halves, I've been on my deep cleaning programme.  If it's hard surface, it's been vacuumed, washed or polished.  If it's soft it's been laundered, so my whirlygig has been groaning under the weight of the house's entire complement of bedding, pillows and duvets, slip covers and curtains, cushions and throws.
Yadda yadda ... You get the picture.  Deep cleaning.

Yup, that's what I've been up to, some pretty hard graft.  And as of this evening, Chez Pout is now ready for summer, and I'm ready for bed!

(You do need to know this, BTW, this isn't just mindless rambling)

What about you, readers?  Do you go through a marathon clean and launder period at this time of year?  Deep cleaning?  Spring cleaning?

So there's been no time for outings.  Except for one morning last week.
To create this. 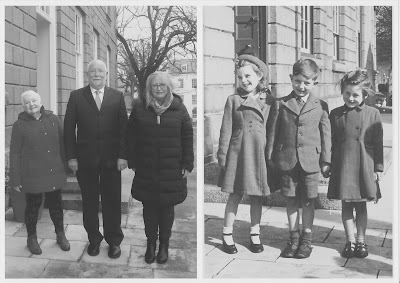 Two cousins and I re-created the photo on the right.   Same place, same day, same time - just 63 years in between (I'm the 5 year old on the right).  I still remember vividly a few moments of this day .

I was surprised that without liaising, all three of us decided to wear the current-day equivalent of what we wore back then, right down to a three buttoned jacket - now that's attention to detail!  Did I say detail?  My cousin who's idea this was had even put yellow stickers on the slabs to guide us to our exact same spaces.  Except that we no longer fitted them. Hmmnnn.  63 years on and we'd grown a bit too big for our younger-self spaces so we had to spread out a bit!

Anyway, space issues aside, it was a super way to spend a Monday morning.

Have you ever recreated an old photo? I'd love to hear.

So where are these ramblings heading?
Well, from the point when TP went into hospital I didn't wear make up.  Other things on my mind.  Then when he was discharged a few weeks later, I busied myself with his care and catching up with housework and spring cleaning.  Still no make up.  I went the longest period without make up in history  since I was 16.
But for this very special photoshoot, I decided I would wear make up.

Now, I've discovered that I'm not the sort of lady who looks at herself in the mirror too much.  Briefly first thing in the morning when applying moisturiser.  And if I remember,  even more briefly last thing at night just to check I've not got toothpaste on my cheek before getting into bed (oh yes, this has happened, what can I say, I'm a messy brusher).  But not much mirror checking in between.
(Trust me, you do need to know all of this too.)

So the day after the photoshoot, around mid-afternoon, after having greeted the postman, updated the neighbour on TP's progress, gone grocery shopping, etc etc., I chanced to look in the bathroom mirror whilst washing my hands. 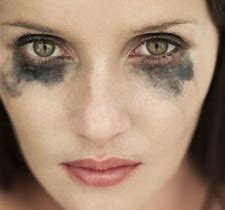 I had huge panda eyes.  And I had shown them to the world.

Then the penny dropped.  I'd gone to bed without removing my make up.  I'd totally got out of the habit of make-up removal at night.  And my aging brain had forgotten that I'd worn it for the special photoshoot.  Funny that I can remember vividly moments from a day 63 years ago but not what I did a few hours earlier ... note to self: up your blueberry intake, Pout (READ HERE).

I wore make up again a few days later, but with the proviso that if TP saw me in bed drinking my Ovaltine nightcap and looking like Zsa Zsa Gabor, then he must vow to shove me right back into the bathroom again!

"Oh dahlink, I completely forgot I wore make up today!"


Now that I've got to the stage that I forget I'm still wearing make up at the end of the day, then maybe it's time to end the make up!

Now, your turn, sweet readers, has this happened to YOU?!

A la perchoine.
Posted by thepoutingpensioner at 00:23:00