Underpinnings.  Don’t you just love that word?
I’ve  heard American bloggers use it to describe underwear and it describes their function pretty well, for without the right underpinnings your dress, top, trousers just aren’t going to look their best.
Knickers need to give a firm hold with no VPL.
Bras need to lift and give a smooth line under slinkier closer fitting tops, especially if of jersey fabric.

Cleavage bras have had their day in my underwear wardrobe and in recent years the T shirt bra has been the thing, solely because we all know what they really are for eh -  nipple cover!
I have to say I’ve become pretty reliant on these over the years but all mine were underwired.
In the last year I’ve found underwiring to be uncomfortable - the wires start to move and rub little holes in the casing and eventually break out and poke out.  And there is no amount of good stitching that can keep those pesky wires permanently encased once break out happens.   Do you find that?

Wire break out became more and more an issue for me of late so I made the bold decision to go wireless and eventually in lockdown I found myself using my bonus time to go on a mission.
I used my time to assess my bra situation.
Despite having a huge (embarrassing huge) stash of bras,  I really had no wireless bras to speak of.
So I went on a hunt which resulted in bra restocking, my only clothes spend in probably 6 months or so.

And of course I headed to M&S - they are the go-to for British ladies’ underwear shopping eh?
And my blogger friend and reader Terri and many other Americans have started buying the brand too as M&S does so much more than just good underwear.

So enough waffle, I went WiFi the bra department so let’s see what wireless underpinnings I invested in.

My starting point was to find bras in nude and white neutrals, the base for any underwear wardrobe..

These transitioned me well from T shirt bras, still a slightly padded bra giving nipple coverage and with a pretty lace insert.
So I got those and some of their plain modal knickers in nude, white and black as some of my oldies had become tatty in the elastic areas

And if I’m brutally honest here, Covid-19 highlighted more than ever that one never knows when one is going to be hospitalized and that old adage of always wearing good (and matching!) underwear in case you get run over by a bus became even more relevant in lockdown.

Then my eyes strayed to this prettiness. 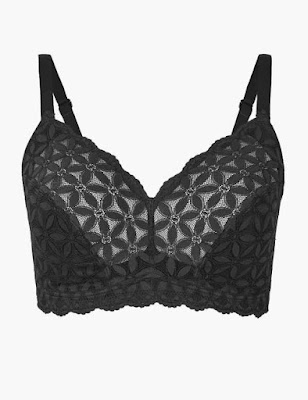 £20, goes up to even G cup I think, so perfect for we larger ladies.

So I bought this pretty black bralette, a new thing which mainly seems to be a bra which extends below the immediate bust line.  This one has a modest extension.  And ladies, this one is the Goldilocks bra!

It gives a lovely soft shape and is my absolute favourite, though as it’s not padded I’ve had to retrain myself in nipple alignment.  It seems to have been a lost art in the T shirt era as with those we can simply wear and forget where those nipples have strayed.  And it’s in photos that, too late. one discovers asymmetrical nippleage eh ladies?  After going out and about all day and oblivious to the headlights displayed for all to see!

Yup I absolutely loved this bra.  It gives a soft shape and actually separates the girls in the middle rather than squishing them together as most wireless bras do.
So I went searching for a white.  Sold out.  There was a pretty pink version however and I thought, hey why not treat myself, stray from the neutrals and buy myself something feminine and frivolous like the pink in the range which WAS still in stock.
So I did.

But then it opened up that fear of being knocked over by a bus and being caught without matching underwear (like that REALLY would be what I was worrying about if I WAS knocked over by a bus!).
So I had to search out matching knickers.
And warning ladies, I’m soooo over my thong stage - it’s big Hello Mummy waist knickers for me every time these days!

These modal knickers are pretty darn perfect too.  They have a lovely lace leg edge which is followed through in a wider panel along the back.   Pretty and as there was a 4 for 3 offer, I now have a pretty pink suite in my underpinnings wardrobe.

And that, ladies, is my underwear refurbishment journey and what I have been shopping in lockdown.

So some very personal questions today, but expected with today’s subject matter eh.
Have you needed to replace bras or knickers lately?
Are you a T shirt bra fan?
Have you moved away from underwired bras?
Do you find yourself exposed to asymmetric nipple display without the T shirt bra parachute?
And are you still wearing thongs or have you moved to Bridget Jones Big Girls’ Knickers too?!

Posted by thepoutingpensioner at 10:40:00

Email ThisBlogThis!Share to TwitterShare to FacebookShare to Pinterest
Labels: Underwear