To have one flat tyre is unfortunate.
To have two in one week is to indicate a fancy for the Tyre Man.

Well, I think I'm turning Oscar Wilde, I really think so, as that's how I was paraphrasing his observation as I drove down the hill to the coast a few weeks ago.  I'd just picked up The Photographer from the airport.

My fears were confirmed as I drove into the car park.  My car had a flattie, just a day after Tyre Man sorted out a puncture on TP's car for me, which occurred whilst TP was off-island.  The tyre had a large nail stuck in its outer side.  As Tyre Man and I stared at it, l squirmed a little.  I'll admit now that it looked slightly suspect, staged, like I'd manufactured an excuse to visit Tyre Man.


That's the back-story.  Let's take this up at the point I reach the coast.  Grab a cuppa, cosy up and allow me to tell you my
Saturday Story. 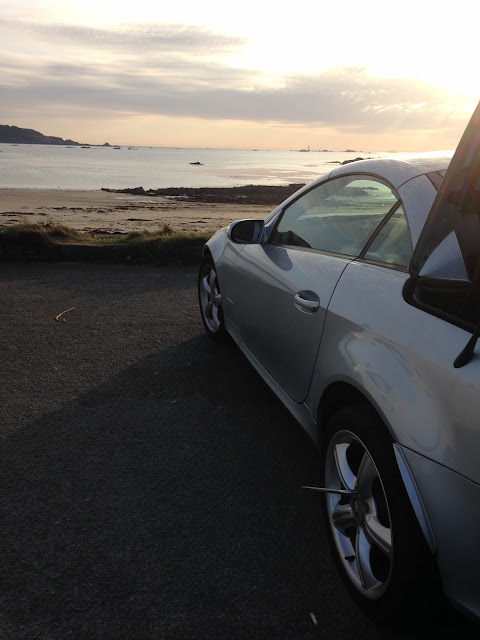 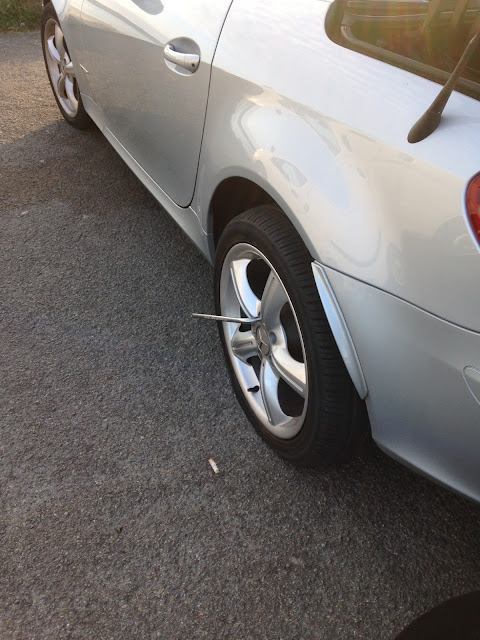 Flat.  TP sticks a wrench on the bolt and sets to work.

I looked around idly, camera in hand. 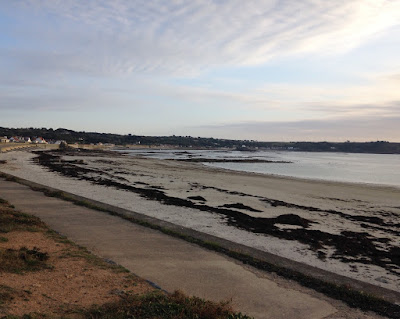 There could be worse places to have a flattie, I say. 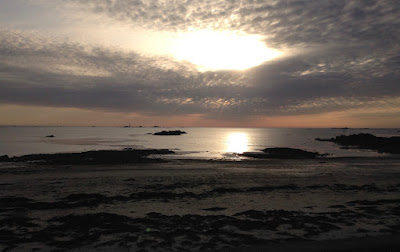 Let's hope we can fix it before the sun sets, I say.

I'll record this in pictures, I say.
(Rather helpfully, I thought.)

We scratch out heads and see what else we've got in the boot.
Phew, we find a spare!  But it's an inflatable.

We chuck out everything on to the tarmac.
We scratch out heads some more and look lost.

The bolts aren't moving.  We both bash and kick at the tyre bolts (TP only light-tapping on my orders as he's recovering from surgery).
The bolts don't budge.
I phone Bro.  Bro lives other end of island.  Says he's on his way.

We scratch out heads some more. 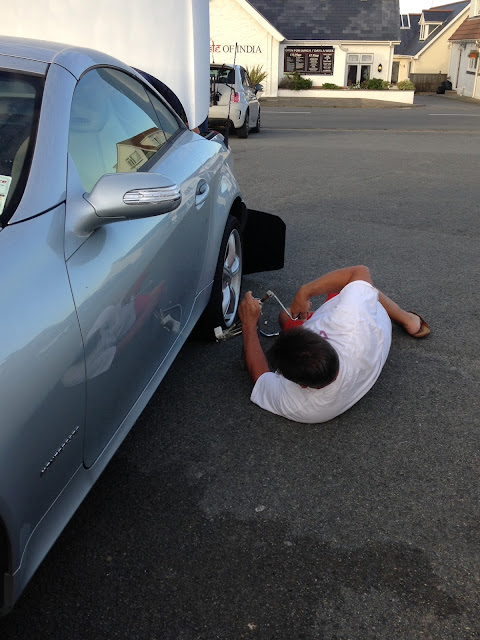 Bloke on his way home from surfing pills in next to us for a ... to use the facilities.
Bloke sees two aging dimwits scratching their heads  seizes adventure opportunity.  He takes over.  Frees each bolt with a single kick.  Removes tyre with ease.

After much gymnastic jiggling in little van, Bloke has his Eureka! moment and finds the outlet.

Bloke starts inflating tyre.
Bloke dashes off  saunters off to have a ...use the facilities. 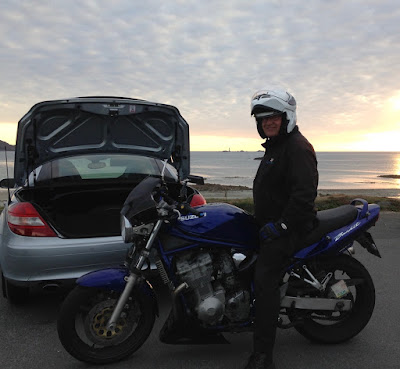 Bro thankfully arrives 20 minutes later on Suzuki.  ( Is this how Peter Fonda would morph now, with a 21st century 'elf and safety makeover of helmet and protective clothing?)

Bro knows Bloke.  Bro sees Bloke has been at it whilst Bro sped his merry Easy Rider way along the highway the coast road which spans the length off the island. 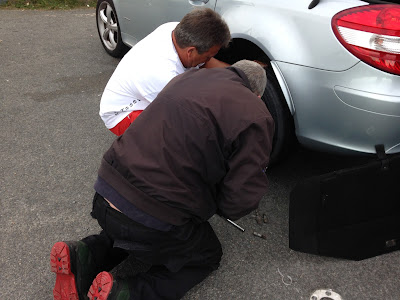 Bloke and Bro now bloke-bond and fit inflated spare together. 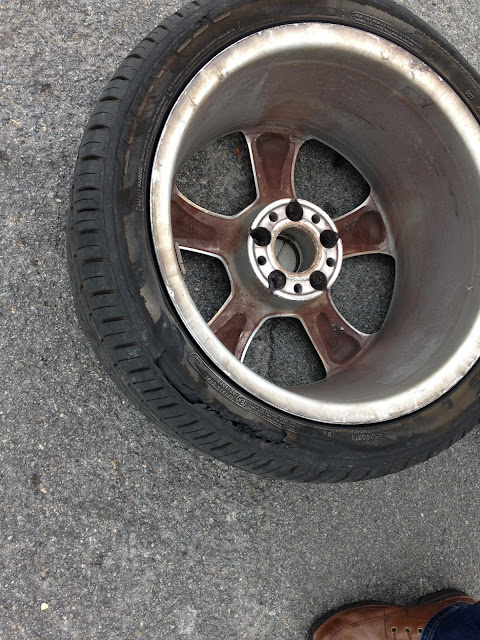 Removed tyre shows serious long term erosion and on the inside too.
Phew! Surely tyre-man can't suspect I've sabotaged THIS one?!

Meantime, as TP had arrived on island dressed only in a short sleeved polo and has a cold, I insist he wears my jacket. 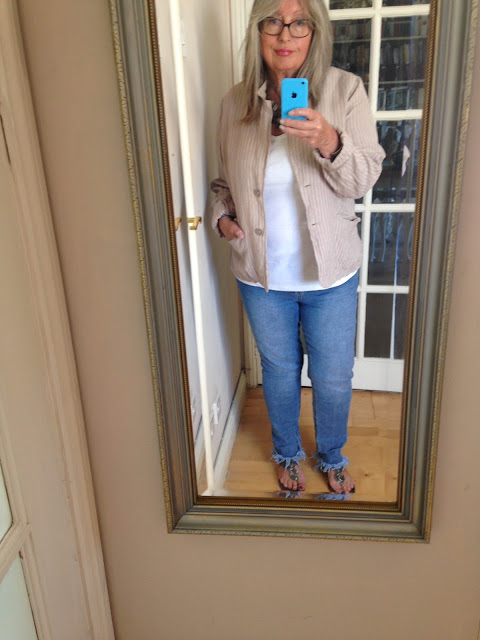 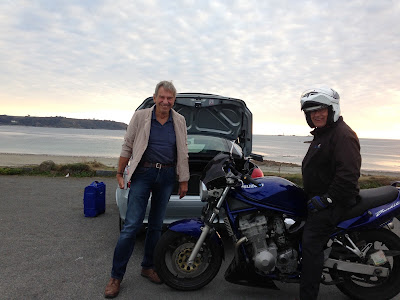 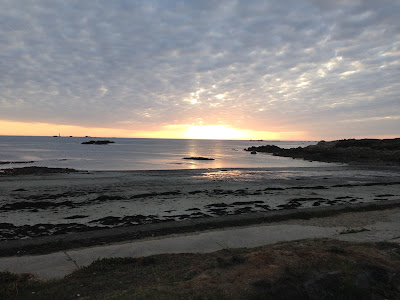 The tyre is replaced just as the sun is setting.

I attempt to hand Bloke twenty quid for a beer after stepping in with such generous spirit and turning our crisis into a photo shoot.
He refuses proffered beer money point blank.
"There goes a true Guernseyman" says Bro proudly as Bloke drives off into the setting sun.

Next day, Tyre Man eyes me rather suspiciously  ...

Big thanks to Bro and Bloke for helping us out of this jam.

Posted by thepoutingpensioner at 10:19:00