Hi peeps, before we get started today I just HAVE to share with you. 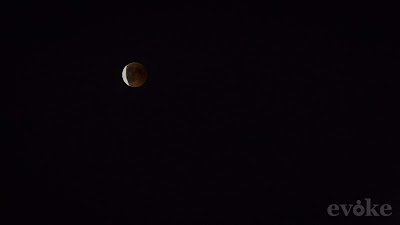 Isn't it an amazing shot?
Did you see the eclipse? The red moon?

It was cloudy evening but the clouds cleared for us to enjoy this fabulous event.

So, here I go again - another film review! 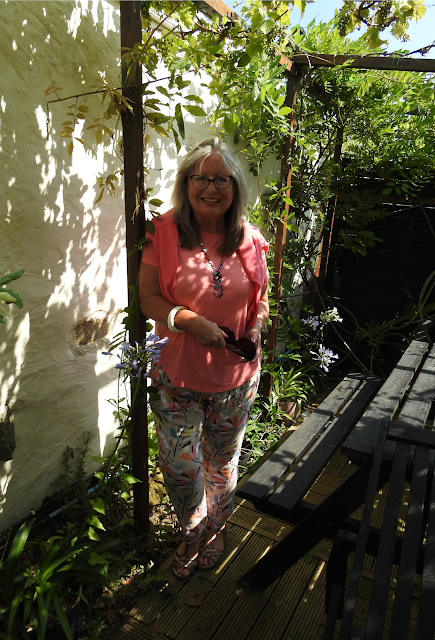 This is what I wore, see yesterday's post for details.
And we went to see Mama Mia, Here I Go Again!

We chose a matinee performance again so the audience was mostly mature, our kind of people.
The Photographer wasn't the only bloke in the cinema this time, the island ladies managed to drag out four others!

And as we were heading outside after the film there was much grumbling in the aged ranks about how we were all crazy to have been indoors watching a film on such a glorious day.  But that's just typical of the wild and bonkers things we pensioners do!
We're livin' life in the fast track, folks ...

Well, it was a fun film.   I won't tell you the storyline, it's an upside down version of MM1.  The script was clever and the film filled in the gaps that perhaps lurked in our minds after the first offering.

It seemed a film of two halves as it got off to a slow start but then suddenly perked up and everyone started oozing energy and talent.  Though Lily James was vibrant and brilliant throughout, what a talented lady she has proved to be in this film.

Again as with the previous film, one gets the feeling that the older and more established film elite had a blast making this, having the chance to let their hair down and show us little snatches of what they're about when not doing their day job.

I love that all the actors' singing voices are used, it gets the audience to bond with the characters.
I particularly loved the performances of the three older guys, er, not that I'm biased or anything, but what's not to love about them?  Colin Firth should do more comedy, loved him, especially in the finale.

So, the finale.
Cher rocked it, what a voice. Meryl was cleverly brought into the story and her musical performance was superb and poignant.  I shed a few tears at this point - didn't expect that from Mama Mia.
And did I mention that the older guys were fabulous?  Oh, Here I Go again!

Oh and the finale was The Best Ever!

And we STILL don't know who the father is !

Now, come on girls!!  Let's get this party started!
You can always subscribe or follow me using the buttons on the right sidebar.  It makes like that little bit easier for you, and I'm all about the easy life in my twilight years!
I post my outfit pics on Pinterest too, BTW.

Posted by thepoutingpensioner at 19:31:00