The Guest Bedroom Makeover.
Another box ticked in March.  Almost.

Much March Madness has been going on in my home.
I summarised in my previous post how much attention I've given Chez Pout during the month.
Here's the guest bedroom, the focus of recent attention.  It's an almost finished room but I just had to share it with you NOW! 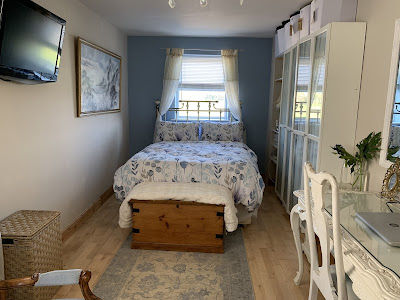 The scheme is blue and white and a light putty colour.

The Room Before (pics from about 5 years ago) 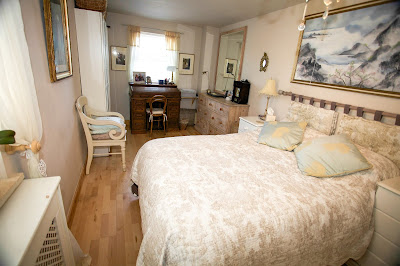 The room is long and narrow.
It was bitty and a bit bland.  It lacked "identity".
I changed it round a bit a few years ago, after these shots,  but only a little and I knew it was unfinished work. 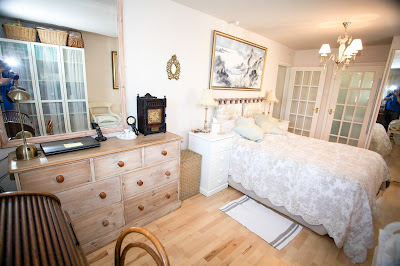 The glazed door at the end goes through to the ensuite shower room - it was a wardrobe run when I bought the house; that changed pretty soon after moving in!
A double wardrobe was built using one of the old wardrobe mirror doors (just in sight on the right).

So, the room was long overdue a revamp and I had to decide what elements would drive this project.  That was the easy part.
1)  the large Japanese islands oil painting.  It's big and doesn't fit in any other room.  I had it in my bedroom in my previous house and I've had it for 27 years so it ain't going nowhere!
2) the blue velvet Victorian nursing chair, which belonged to TP's grandmother.

These two items were the key drivers.  So blue was the colour for this room, obvs.  Then came the hard part, the makeover! 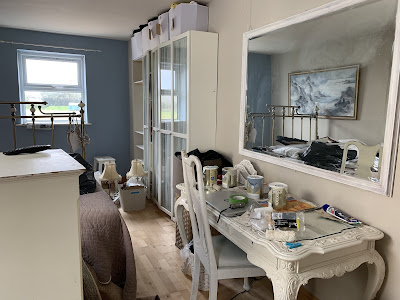 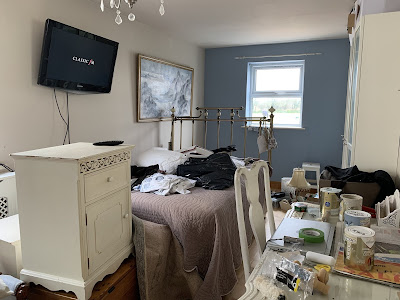 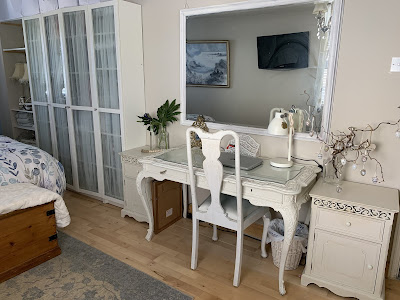 We switched the brownware roll top desk for the white glass top desk.  I felt it created a dressing table and determined the mood of the room.  I then painted the limed mirror white and we positioned it to span the desk.  It reflects light from the window opposite and creates the illusion of width in this narrow room.

A surprise bonus were the old bedside cupboards.    Adding the old brass bedstead, surplus from the main bedroom, added an inch of width to the bed, which meant the cabinets now didn't quite fit the already-tight space either side of the bed.  Removal of the bedstead wasn't an option as it had been
a b*%%#& to fit difficult to fit, so TP came up with plans to saw bits off the cabinet tops and take out chunks of skirting board.
I stepped back and paused, had a "ha'peth of tar" moment and said "You know what, I'll buy smaller nightstands!".  And just like that, the v.old cabinets were queued for the charity shop.

But when tidying up the mess after painting, I happened to shove one of them out of my way, next to the dressing table.  Then as I tidied some more, I was suddenly inspired to see if the two fitted either side.  They did, just!  So they stayed.

I like the run of desk and cabinets and they provide extra storage.  Maybe I'll freshen them up with a lick of paint, maybe I won't. 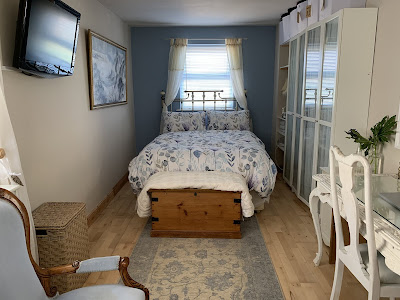 Similarly, I'm undecided about painting the old chest, but it needs to stay at the end of the bed to stop the bed sliding all over the wooden floor on its castors! 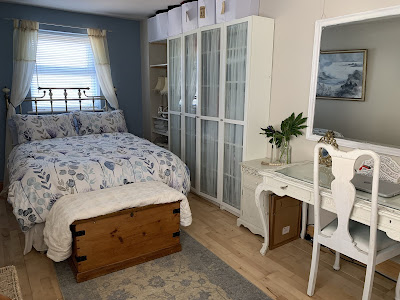 The glazed Billys from Ikea are tremendously good storage and a few years ago when they switched walls I had a carpenter build shelves up to the wall. 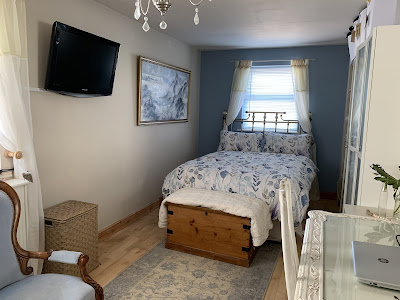 TP tidied up the dangly TV cabling in trunking.

Yes, that troublesome brass bedstead was so going to be dumped when it became surplus to requirements after the arrival of the new master bedroom whizzy bed, but I thought I'd give it a go in here before it left the house and I liked it!  The brass links to the touches of gold in the picture frame. 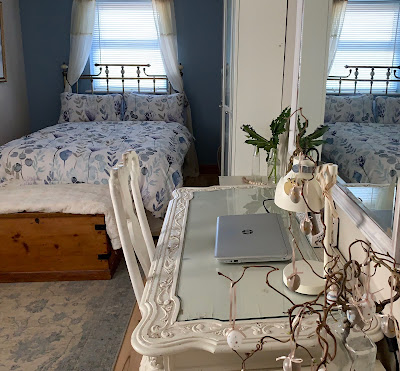 TP refreshed three walls with a putty coloured paint and although he wasn't convinced at first, we added a blue wall to echo the blue in the painting and bedding to knit the room colours together.  It balances out the long corridor effect of this room shape and creates a cosy feel.

Everything else was washed and ironed and looks fresh again.

Freebies
Leftover Dulux Trade white eggshell for mirror surround.
Bed, bed set, curtains, rug,  etc, existing.
Desk swapped in to create a dressing table.
Cabinets flanking the desk, no longer fitting the original space and were going to be charitied.
Bedstead a throw-out from the master bedroom makeover and was destined for the charity shop too.

So for a little over £200 and a bit of washing and furniture shifting, the room has been revamped.
My guests will enjoy a fresh spring feel to the room - La Duchesse, what do you think of 'your' room now ?!!

2018 was my year of Light Touch.
I've declared 2019 to be my year of returning things to their rightful place in the house.
I've lived here 16 years and over the years things have been chopped and changed and switched and some are no longer where they are best suited. This white desk is a perfect example of my 2019 Right Place drive - it's natural place is here.

Ok this isn't a modern room makeover.   It's not all black and moody and mid last century.  It's traditional.
You will see that the decor style was determined by the style of existing hard and soft furnishings as I didn't want to spend too much on this room after splurging on a full makeover in the master bedroom!  So it's perhaps a bit "old lady" in decor terms.  But the room had always been hotch potch, thrown together with a bit of this and a bit of that.  It still is, I 'spose, but it seems a bit more cohesive now, more singular in style.
I think a lot has been achieved here for a handful of loose change  and a bit of graft - I've made a silk purse out of a sow's ear and the room is now inviting and pretty.

Do you have a neglected spare room, filled with furnishings that had nowhere else to go?
A room that could perhaps benefit from taking a step back and a rethink?
It's surprising what can be achieved with a small budget when you focus on a room's identity driven by what you already have.
Some of this room's changes have been purely accidental - The Universe can sometimes be your interior designer!

Posted by thepoutingpensioner at 08:40:00