Hi my lovely blog friends!
Hope you are having a splendid April so far.

It turns out that I'm on a sort of break from blogging.  I hope you haven't forgotten me.
My break wasn't planned but it just sort of happened.  A lot of spring cleaning.  An awful cold.  And that was March gone and a chunkette of April.   Now I'm in Sussex and I’m adding hay fever to the mix.  I’m totally zonked out!  So no carefully considered outfits have been put together for some weeks, instead thoughtless throw ons of jumper and jeans have graced this lady’s sniffling form!

Today seems the first opportunity I've had in weeks to sit at a laptop.  So in order to buy myself a bit of breathing space to gather my thoughts I'll leave you with a little snippet of film I took a few days ago when visiting Pevensey Castle.

I've written about the castle previously.  It's a castle I'm drawn to, I think because there are so many layers of history within its sturdy walls.  And quite literally too, for the layers of history can be seen in the crumbling stonework.  So rather than reinvent the wheel I'll be so pleased if you could read the post HERE, or below, for background to my little bit of very amateurish impromptu film, blatantly unplanned and unscripted!


My Pevensey Post, Revisited
(originally written on the day of the Brexit vote)

It's a rather strange day, historically, one where my voice could not be heard, my vote could not given.  So, by way of distraction please join me on a recent trip through historical times.

The remains of Pevensey Castle lie on the East Sussex coast.  In 1066 the Normans, led by William the Conqueror, landed here in Pevensey.  A wooden camp/castle was quickly established around the remains of a Roman stone-built fort.  Three weeks after landing, the Normans marched eastwards and fought the English at the Battle of Hastings, won the battle and the rest is history.  Quite literally. 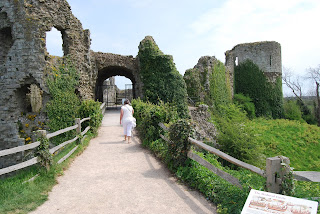 The Normans built a stone castle on this site after the victory. 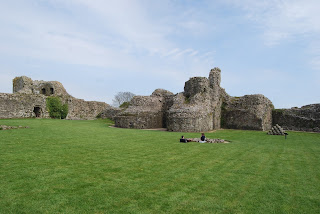 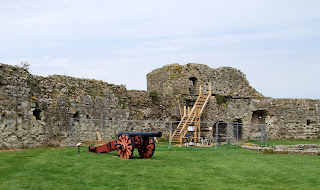 Restoration work is being carried out but this Tudor canon is left on view. 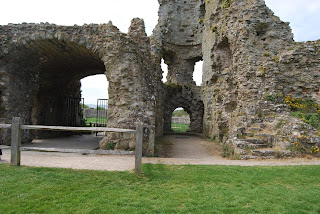 In the pathway under the window area is a grille door to an underground Oubliette ("a little forgotten"?!), where prestigious prisoners were held to ransom. 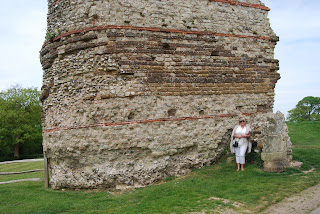 Here is one of the remaining entrance walls built in Roman times.  Pretty amazing, huh?  A marriage of flint, brick and stone. 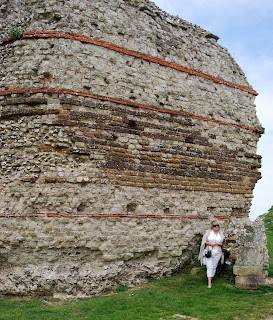 I learned how the original Roman fort was established to repel landing Saxon pirates.
At that time, the fort lay next to the sea.  Over time the sea has receded from the area. 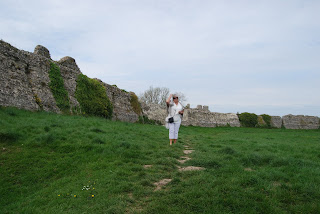 Here's more of the Roman site.  The fort covered a much larger area than the Norman castle.
With apologies for my messy-tourist look, BTW, I was reahlly suffering badly from pollen that day and had lost the will :-(.

Taking in all this information, of Roman occupation, Saxon pirates, Norman conquerers, adding Vikings to the mix and the "ethnic" Picts, Celts and Angles, I stood in the castle grounds and thought "who DO I think I am".  Genealogy is only as good as the records that are written, and in the greater scheme of things I had to reply "I haven't a clue".  Pretty humbling.
So maybe history tells me that who I am is really about where I am right now.

And that was where I left those thoughts, that day, in that ruined castle, on a piece of land we now call England.
The thoughts of a pensioner who just wanted to flop out on a sofa, with a box of tissues, indoors away from the pollen, and close her burning, streaming eyes!

And the spooky thing was that I started my hay fever whilst revisiting the castle on Saturday, and I came home and flopped out on the sofa with a box of tissues again.  Talk about Groundhog Day!


Also of historic note is that I don't seem to have been wearing anything remotely photo worthy lately.  The Photographer feels he's on some sort of break too, as I haven't been pestering him for OOTD
photos in weeks!  I'm hoping I'll muster some inclination to tart myself up a bit soon because, heck, I'm meeting up with a fellow blogger on Saturday and I don't think I'd be recognisable as my blogging alter ego right now!

Here's wishing you a great week, my lovelies,
a la perchoine,
Mary x.

Posted by thepoutingpensioner at 12:32:00