Yes, I attempted to write about the film in yesterday's Six, but it just got too big and unwieldy within that post format so here's your bonus feature today.I

I dragged The Photographer along to yet another chick flick last weekend.  It did sorta feel like I was dragging him, and he almost escaped! 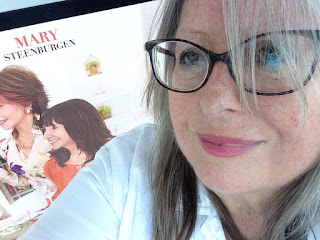 (Me with poster, to evidence that I was there)

For we'd almost not seen it as I messed up the online booking and the machine printed out tickets for Solo: Star Wars.  TP said "oh well, it could be a good film to watch" and I found myself momentarily resigning myself to watching a fantasy fiction film, a genre which is not totally my bag.   But I'm headstrong and I snapped myself out of acquiescence.  I'd  gone to see Book Club and Book Club I shall see.  So I used my "charm" on the ticket office fella and despite that he kindly switched the tickets with a sweet "no problem". 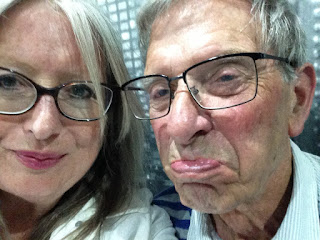 TP's spoilt look: But I wanted to see Solo.

Apropos fantasy films, I tell TP that I don't like them because they are, err, fantasy.  I like Real Life films.  Raw.  Life as it really is.  So I like Rom Coms.  Chick Flicks.  For that is Real Life.  In my world! 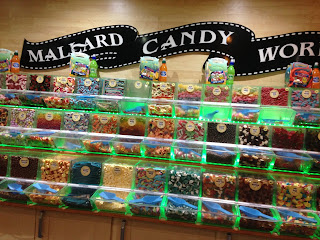 Not one cinema snack passed my lips. 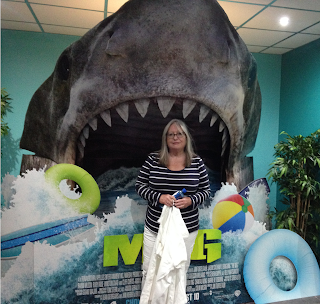 I nearly passed these lips!

Our cinema is quite parochial, quite small-town.  We have 4 screens. 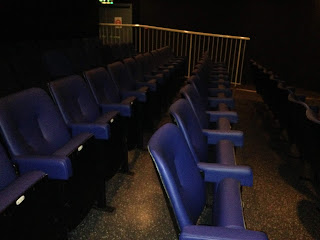 This is the smallest.  It has five rows of about 15 seats!


It's a chick flick - did I mention that I love chick flicks?
It's about a group of shall we say mature ladies who have been friends since  young adulthood.  Please look at the trailer for full flavour.

It's pleasant enough, funny in lots of places.  It's definitely a feel-good kinda film and I walked away from our petite cinema feeling exactly that.  It gets my 👍.

It brings out some of the issues that we have to deal with when we reach a certain age.

A criticism would be that it has implausible pairings, like Don Johnson (lookin' good, Don!)  paired with Jane Fonda.

Another criticism would be that it doesn't have the gorgeous interiors constructed to please female viewers, e.g. like in Something's Gotta Give and It's Complicated
(how I swooon ... ).

Oh and if I can squeeze in just one more girlie gripe without sounding like Moaning Mary - outfits!
When Diane Keaton dressed for her date in SGG, she opened the door to Jack looking stunning in an unforgettable wrap dress and slinky necklace, a look so inspirational that I knew instantly that I would steal it, and I did.
In BC her friends dressed her for her beau in a forgettable shapeless black trouser suit/white buttoned up shirt outfit, no skin on view; it's a signature DK look but not one to wow on a first date, IMHO.

Otherwise, all fine.  It's definitely a chick flick.

And I whispered to TP half way through that perhaps it is not the film to watch when you're the only male in the audience (which he was), as some bits are a bit, er, personal.   But he whispered back that he was OK with that.

And Kellyann, TP says he'll back up Brian if he too is dragging his heels to go see the film!

The sun was just about to set as we drove home.  It looked glorious.  By the time I got out my phone, it had already set.  II felt as if someone had stolen my sun. 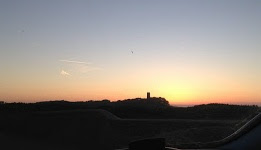 I leave you with the sun, having set.

A la perchoine.
Posted by thepoutingpensioner at 15:14:00