Hello my lovelies and Happy New Year to you!
I hope your Christmas holiday turned out to be the one you'd wished for.
I've got to say, I found the whole of December rather full on.  I felt there wasn't a day I could go off-list, and by the time we got to the end of the month I was working off 3 or 4 of them!
Christmas was no mistletoe, a little wine and lots of wonderful hours and days spent with wonderful family and friends.

And now that we've got to the other side and my lists have mostly been binned, I'd like to share a little of my season's activities with you.  I call them activities but there was little physical action required of me, mostly I turned up and did something lovely with lovely people and had the loveliest time.  So please don't expect to see pics of any cocktail parties or midnight skiing, I'm way over the former and the latter was never my bag!

Oh and before I start up, please note I'm using slightly different visuals to normal - a mix of video and photos.  It's just the way things panned out over the hols.    But please do click on the videos as most are less than a minute long.
Now, get yourself a mulled wine and a fur throw and have a cosy read ... 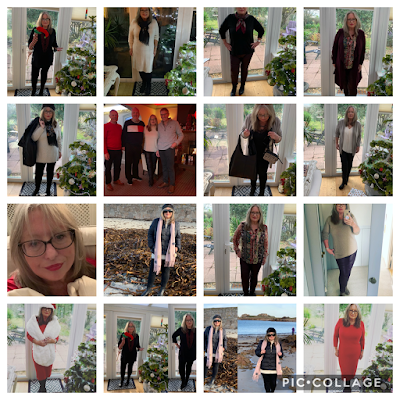 I don't get into the true spirit of Christmas until I've been to at least one children's nativity play or carol service. Are you like that too?
This Christmas I was blessed with TWO nativities, both of which the GKs had speaking, singing and dancing roles in and they performed brilliantly.  So proud!

(Video clip of choir's pre-service warm up - I wouldn't film the service, obvs)

Top that that with an amazing Carol service in our Town  church and you're looking at one extremely happy Christmas bunny!

This is my living tree's third Christmas indoors.
It's shape is still a little patchy and asymmetric and there are some who might say it is just simply not up to the job.
So I did have thoughts of leaving it outside this year and lighting it with outdoor lights, but I asked the grandkiddies what kind of tree they wanted at Granny's House and the response was immediate and unanimous, "the same as last year" so that swayed me to give it a third year indoors.

But I have a really brilliant plan for it for next year.  Just you wait!

The best way of socialising - no hassle with A to B logistics!
And again, I had not one but two evenings with them, and the second was with just the immediate neighbours and by popular request,

so I must be an OK neighbour!

This was spent with my immediate family and was so lovely, as always.  Fabulous company, food, music recital, games, oh and presents too - I was spoiled!

I always cook the turkey, stuffing and gravy and then it's driven very carefully to Son's house a few minutes away.  This year, Son had given me a meat thermometer before Christmas and I have to say it was a game-changer.  I have traditionally erred on the side of complete fear and overcooked - the thermometer resulted in far less cooking time, far less stress and some tasty, succulent and juicy turkey.  If you think they're just stuff and nonsense, then banish that thought and get yourself one.

(click on the link above - and cheap as perfectly cooked chips!)

It's held at our local beach, just down the road and it was a glorious day for it.
Air and sea temps were 10°c, the day dry, windless and obviously warm.  And the sea was just off high-tide.

Was it those optimum conditions or a "bucket list" moment that found me high-fiving the GKs for us to do the swim together this coming Christmas?!

I got given a new pinni at Christmas - a Sprout Pout pinni.  Perfik! 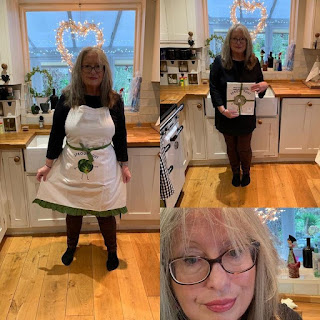 Pinned up and working to list 4(ii), the house was scrubbed up and furniture was shuffled around to make a comfortable social space for the wider family (mine, Bro and Sis's families). 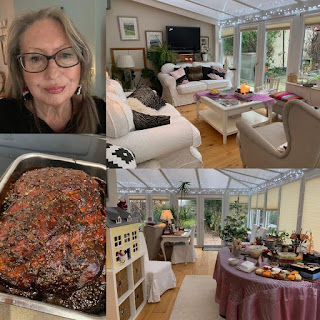 It scrubs up well and the open kitchen/dining/lounge/bathroom arrangement at the back of the house makes a pretty good party space.  Up to 70 have partied here comfortably previously.

Over the years I've drifted towards simple, classic food for parties.
I made herby sausage rolls (with shop-bought puff pastry of course!), coronation turkey, potato salad ... And treacle-ham!
Yes, ham ... and treacle ... cooked together!!! Weird huh?

The sausage rolls were made with skinned good sausages and the  fresh herbs I had to hand (basil and parsley, I think).

The coronation turkey came out just the way I  like it.
I made up a curry mix to add extra oomph to taste, it needed more kick and it got it! 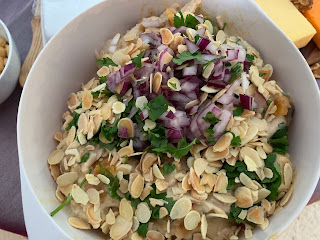 These dishes came out exceptionally good, as did the potato salad.
I received lots of convincing compliments ☺.

And then we get to the ham!

Here's the link to the recipe, SLOW COOKED BLACK TREACLE HAM,  before you start scribbling like mad from my video!

(But a heads up first - my hair is weird a mess in this clip after a few hours of serious kitchen action.  I only discovered this when the first guests arrived and asked  what fashion statement I was attempting  to make!!)

Oh boy was this ham was good!!!  The meat fell off the bone.  And the house smelled so warm and festive for hours and hours.  I've not cooked ham exclusively in the oven before, usually doing it the - hob slow-simmer and final roast -  way, but this IS the way to go for me from now on, folks, so effortless!!

I host the party each year.  It is always a wonderful event, with the three generations getting together at Christmas time and catching up.  And it's such a pleasure to see the youngest generation playing together and having so much fun.

And then it was goodbye Christmas and time to de-festivise (sic!!) the house.

I can't resist an illuminated decoration or string of lights.  They're mostly battery operated these days, which gives so much freedom as to their placing.   The house becomes more  festooned with lights with each year.  Chez Pout is starting to look a bit Blackpool Illuminations, so there's a lot to de-festivise. 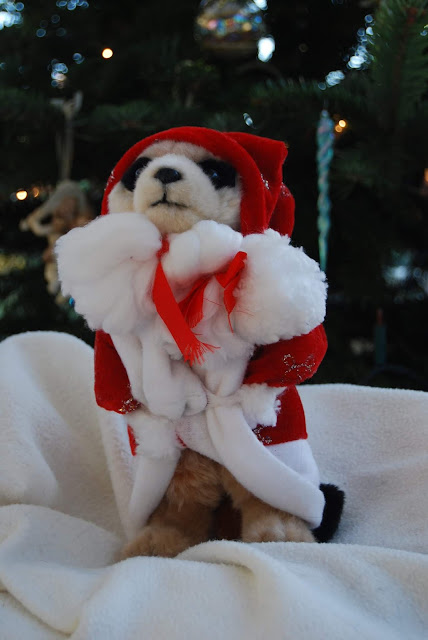 And now all the decorations have been packed away.
As a child, I used to be so sad staring at a bare house after the tinsel and  tree lights, paper chains and balloons came down.  These days it's nice to think about what I'm going to replace the Christmas glitz with!  More glitz, methinks 😊.

And yesterday, on New Year's Day,  we popped into St Peter Port for an early evening mooch around our little town before its lights came down too.

At the end of the festivities, I like to have a little think about how things went and could anything be done better.

Well, Christmas cards is a could do better - I had to order an extra 20 during December, so note to self, I may end up with a few surplus cards with an order of 100, but 80 is NEVER enough.

And unforeseen circumstances meant that I had to scupper my previous year's plan, that being to act like an American, decorate for Thanksgiving and use that as my target for EVERYTHING so that I get a totally list-free December.  But I'm not giving up on that one.