Hello my lovelies!
It’s gardening time in the northern hemisphere.
I have plenty to do outside that I can do myself but I needed to get a man in to deal with what had become a very big thanks eyesore out there.
A broken pergola that was barely fit for purpose.
Let’s talk about why I need a pergola.
I inherited a very old grape vine when I bought this cottage.

The grape vine needed support as it grew and spread.

So The Photographer built a climbing structure with what wood he could find and he could work with (he’s not a carpenter). 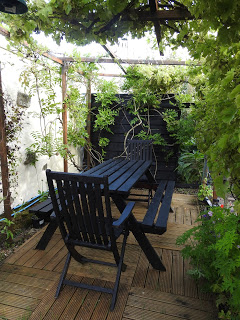 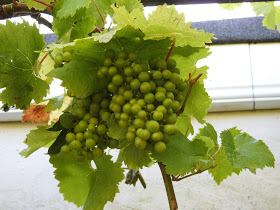 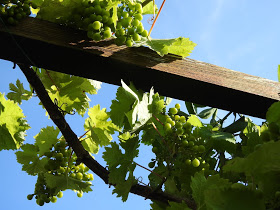 It was strong enough to bear the weight of the annual Chateau Pout crop. 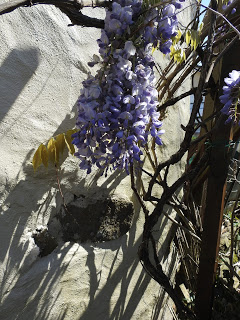 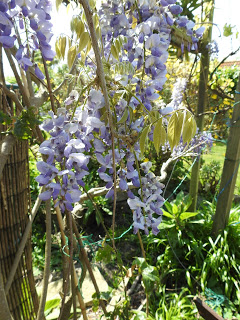 It supported the ever-growing wisteria. 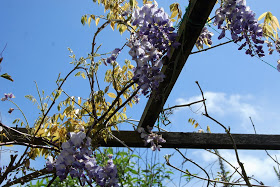 The wisteria branches were spreading up to 50ft, in all directions. 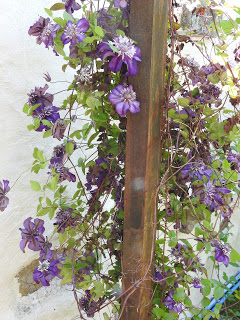 And it also supported a quite healthy clematis.
So it was a pretty hard-worked structure and perhaps not man enough for all the foliage and fruit that became more abundant at the end of each high summer season. 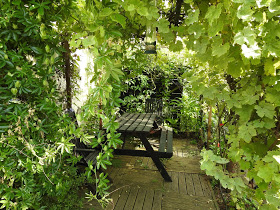 In fact it probably looked like this when disaster at the end of a summer’s worth of leafy growth.
Absolutely laden.
Then this happened. 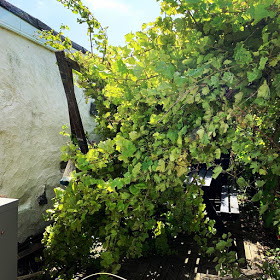 Follow this link Pergola Disaster, to discover what happened in more detail.  If you’re a regular reader you may remember the story. 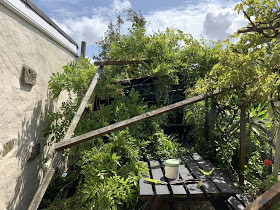 But the short story is that most of the pergola ended up in a collapsed messy pile. TP did an emergency rescue attempt by propping up
what structure remained.
And I was left with half a flimsy pergola holding up
the vines as best it could.
Finally, this week it became this. 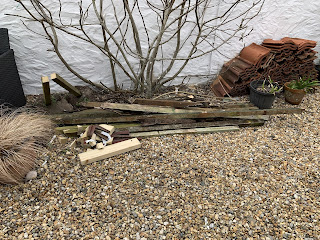 A small pile of old timber.
This was its final resting place.
It doesn’t look much of a pile eh?
Yet it managed to hold up the grape vine and wisteria whilst we dealt with the delays of lockdown and the ensuing difficulties in engaging landscaping trades people as a result of their busy workloads between lockdowns.  One firm said they’d do it “sometime” - and sometime never came.
Finally I came up with the idea of getting a carpenter who’d done some work on the house previously.
I phoned him, he could do the job, and he came round promptly and measured up.
And when we came out of lockdown and he could get hold of the required timber he turned up to start the job. 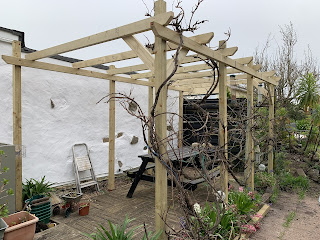 And in one day this sturdy monster was erected.
I now need to put my touch on the area.  I will probably paint the structure black to make the pergola less obtrusive.
I have to address the aging decking.
I have to deal with the worn fence at the back.
I have to replant the area.
It’s fair to say I’m going to busy.
And I will report back in when I've put a big fat tick ✅ against all of those tasks.
Have you any big projects to tackle in your garden?
Hugs, Mary x.
Posted by thepoutingpensioner at 14:07:00